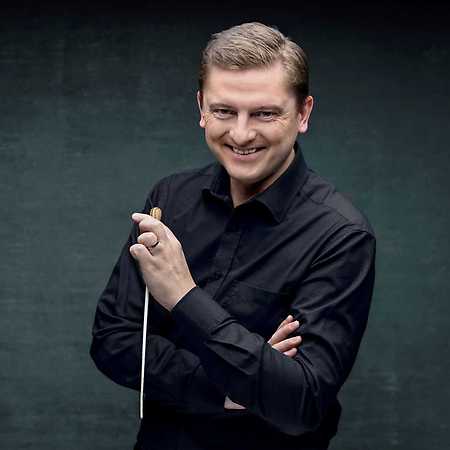 Jan Kučera is Czech conductor, composer and pianist. He studied composition with Bohuslav Řehoř at the Prague Conservatory and conducting with Miriam Němcová and Miroslav Košler. He then developed the conducting at Music and Dance Faculty of the Academy of Performing Arts, Prague under the leadership of Vladimír Válek. As a composer, he is involved in many areas, creating symphonic and chamber music. At the same time, he has made over thirty scenic compositions for productions of Prague and regional theatre scenes. As a conductor, he has been constantly working with leading Czech orchestras, especially the Czech Radio Symphony Orchestra and the Prague Symphony Orchestra FOK. Also, he has been the principal conductor of the Karlovy Vary Symphony Orchestra since the 2015/16 season. He also works on the opera scene. At the New Stage of the National Theatre in Prague, he presented his comic opera The Red Mary, composed on the theme of the cult radio series Rodinka Tluchořových (“The Tluchoř Family”) by Oldřich Kaiser and Jiří Lábus. In January 2016, he staged Gioacchino Rossini’s opera La Cenerentola at the National Theatre. Additionally, he is author of the ballets The Three Musketeers and The Taming of the Shrew. He applied his multi-genre perspective to the project Wanted with Dagmar Pecková, to re-study the epic scenic form of Mass by Leonard Bernstein or during a concert with Adam Plachetka at the O2 Arena in Prague.