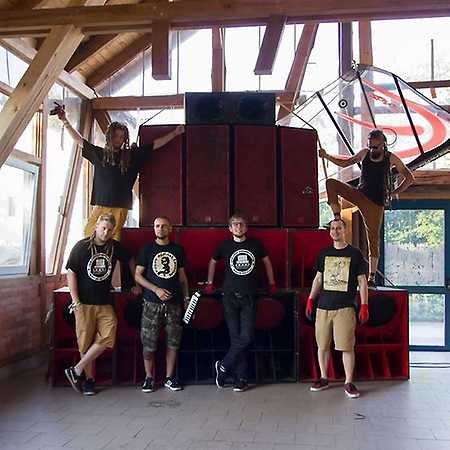 The Jah Love project consists of two pillars. The first one is a collective of selectors who love the crackling of vinyl records and throbbing bass. The second is a self-constructed sound system, which together with amplifiers and hundreds of meters of cables gives the possibility to play dub music wherever there is a crowd loving low frequencies. Through the heavy, bass sound, conscious message and the idea of self-organization go into the world. The beginnings of the project date back to 2009 and cyclical events in the Independent Cultural Centre C5 in Warsaw. The space of an abandoned crisps factory gave an incredible opportunity for development and compelled the young squad to build the first speakers. Events organized there have become part of the Warsaw reggae music scene not only because of their musical qualities, but also because of the unique atmosphere on the squat. That period had a significant impact on the development of the whole band; it was then that the conviction was formed that it was better to organize the event on your own from beginning to end. Nowadays, Jah Love Soundsystem is connected with the Pogłos cooperative and organizes its sessions there.