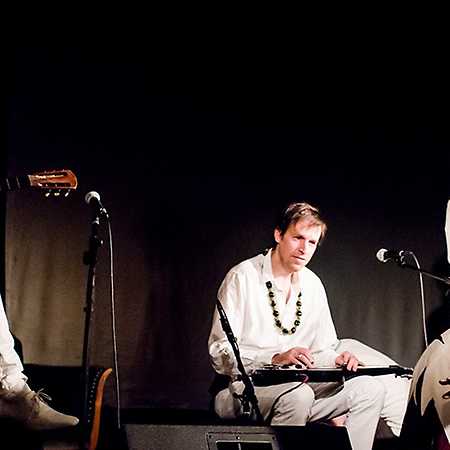 About Hula Hut and the Seven Seas Plays Hawaiian

Hula Hut and the Seven Seas Plays Hawaiian are unique as a live band performing traditional music from the 1920-30s with a focus on the long-lost sounds of the great steel guitar groups, with selections of classics as originally recorded by Sol Hoopii, King Benny Nawahi, Jim and Bob (The Genial Hawaiians) and many others. The group has been performing throughout Berlin since 2011, and consists of Sebastian Müller (acoustic/electric steel guitar), Patrick Arp (ukelele, flattop acoustic guitar) and Taylor Savvy (parlor acoustic guitar). Yuko Matsuyama sings in the unique Hawaiian style (and also plays ukelele), and Derek Shirley accompanies on acoustic bass.