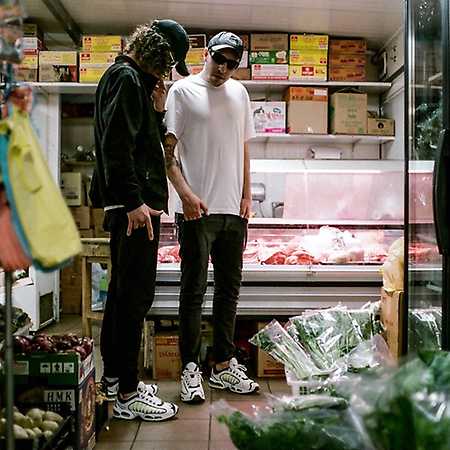 Hewra is a hip hop group co-created by Młody Dron, Don Poldon, ₪ and Zazamek. It stands for street message in a new form – synthetic rap, techno, punk and many more. Stylistically they refer to mumble rap, use ad-libs, auto-tune and bizarre singing, aptly referring to the contemporary American scene, but their inspirations do not end there. They also incorporate elements taken from the psycho rap of the 90s or vaporwave and the VHS era.

Since the end of 2015, they have been loosely publishing their songs on YouTube in the form of a playlist named ₪₪₪₪ MakeHewraGreatForever ₪₪₪, avoiding any official publications. The listeners became more aware of their presence at the beginning of 2016 thanks to recordings under the banner of Hewra Mobbyn, which often featured Kaz Bałagane, Belmondo and Oyche Doniz (also a representative of the former JWP crew, known as Doni). At the end of October 2016, the crew split, which resulted in Belmondo and Oyche Doniz establishing Mobbyn. The first track published after these events was the song Cosa, by some people considered a diss on Young G and Doniz. Meanwhile, representatives of bands such as GRA (Szamz, Młody Dziadek), 022 (Adolpho, Sami, Bert) or Tuzza (Benito and Ricci) started to appear on Hewra’s tracks.