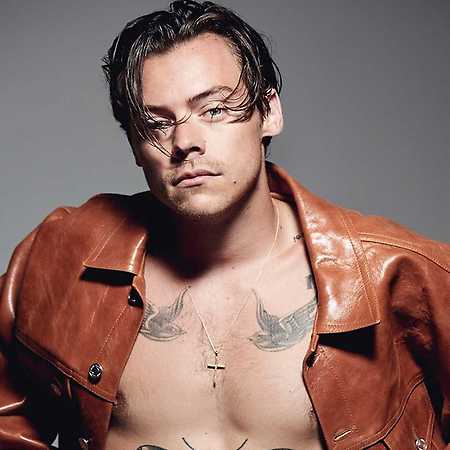 Harry Styles is a British singer, songwriter and actor.
In 2010 he took part in the casting show The X Factor and became part of the band One Direction.
Despite finishing in third place, the band signed with record label Syco.
One Direction’s debut single, What Makes You Beautiful, bowed at number one on the UK Singles Chart in September 2011.
Over the course of their career, the band earned four number-one studio albums on the Billboard 200, and four top-five singles on the Billboard Hot 100. They have sold 7.6 million albums and 26 million singles in the US, embarked on four world tours and won a number of accolades.
In 2016 the band went on an indefinite hiatus.

In May of the same year Styles launched his own record label, Erskine Records, and signed a recording contract with Columbia Records as a solo artist in June.
His first solo single, Sign of the Times, was released in April 2017. The song peaked at number one on the UK Singles Chart and number four on the Billboard Hot 100. The magazine Rolling Stone ranked it as the best song of 2017.
His self-titled debut album was released in May 2017, whereupon it debuted at number one in several countries, including the UK, US, and Australia.
In support of the album, he embarked on his first headlining concert tour, Harry Styles: Live on Tour, from September 2017 through to July 2018, performing in North and South America, Europe, Asia, and Australia.
By the end of the tour, he had raised $1.2 million in charity donations from a portion of ticket and merchandise sales and Live Nation’s contributions for 62 charities around the world.