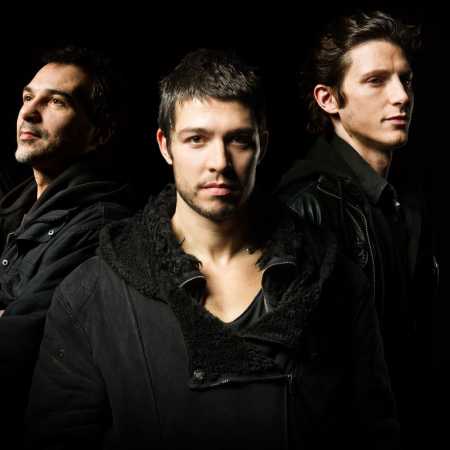 About Guillaume Perret & The Electric Epic

His masakrizující cosmopolitan and endlessly inventive music does not fit tightly into any genre appeals mainly to experience a weaker natures exhibits uncompromising arbor care brutally sensual! “They say about me that I'm a music bully, a misunderstanding, just Scanning moods, desires, fears a revolt of the outside world,” explains jazzman nominated for the prestigious award by the French Victoires du Jazz.

Perretův inside the red illuminated instrument resembles a volcano spewing lava sound unheard, in front of which you are not able to do the wonder for their rescue or step. "Those who survived vytleskávali addition and thereby unwittingly sign their own death sentence. Perret is returned because a good is destroyed, "warns one of the pre-concert reviews. For everything but is not responsible Perret himself, the destruction is also involved in extraordinary band The Electric Epic guitarist and drummer Jeremy Grandcamp Yoann Serra belongs to the French jazz scene of the sought hráčůn and bassist Philippe Bussonnet came from the legendary band Magma, which also further explain some things.

Thirty-two Guillaume Perret still a student fell classic jazz and gradually worked his way into the first jazz League. Meanwhile, listening to African and Brazilian music, he returned to the rock 70 years, deciphered the art of Frank Zappa, John Surman, Eddie Harris, minimalists and composed music for ballet and theater. Performing and recording with many musicians, even flashed and Prague, but in 2008 underwent a radical transformation: founded the Electric Epic, in a custom-made instrument microphone has built a special, added countless pedal effects, allowing it to turn into a saxophone sound guitar and began composing music what is said in my mind for a long time. It remained to find a publisher, so he sent a recording of the New York avant-garde icon John Zorn, Tzadik label owner. In a few hours he apparently came voluminous mail ending with the words: "Unbelievable, you have my respect."

The album was originally appoint Brutalum Voluptuous, but finally in 2012 released on Tzadik named Guillaume Perret & The Electric Epic. Invitation from leading festivals it would never end, wide angle and power of genre compositions did not escape the attention of even the Seven Samurai, levying extraordinary music to the fair Womex, where consecutive Peretti and his group left a very deep mark.

Jan Resl and the Victors