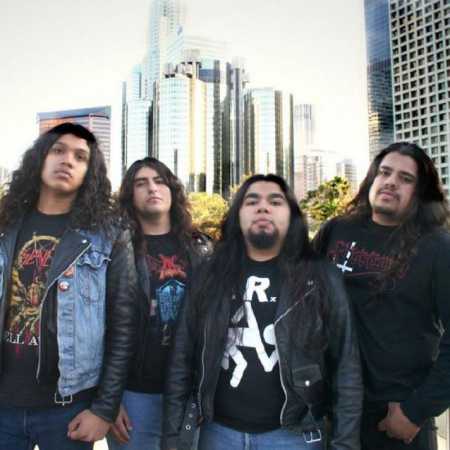 Fueled By Fire  Thrash Is Back

About Fueled By Fire

The band Fueled by Fire was founded in 2002 by Carlos Gutierrez (drums), Rick Rangel (vocals), Adrian Gallego (electric bass) and Sal Zepede (electric guitar). A short time after their inception, Gallego left the band again, Rangel took over the bass and Ray Fiero joined the band as the new singer. Later, bassist Anthony Vasquez joined the band and Rick Rangel took over as guitarist. This lineup remained constant until singer Ray Fiero left the band in January 2004. Only one day later, Jovanny “Gio” Herrera became the new singer as well as the band’s third guitarist. Their first demo called Life … Death … and FBF was released in April 2004. This allowed the band to perform at Whiskey a Go Go in Los Angeles. As a result, the band has performed in Los Angeles and the surrounding area with bands including Exodus, Possessed, Exumer, Heathen, Hallow’s Eve, Hirax and Agent Steel.

Fueled by Fire play classic thrash metal in the style of the 1980s. They are usually being compared to other bands in the genre like Exodus, Testament and Slayer.