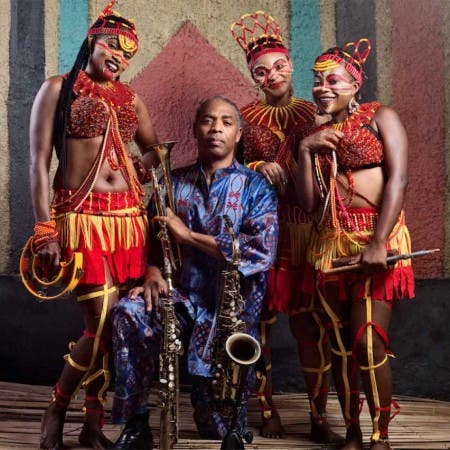 About Femi Kuti & The Positive Force

Olufela Olufemi Anikulapo Kuti popularly known as Femi Kuti, is a Nigerian musician born in London and raised in Lagos. He is the eldest son of afrobeat pioneer Fela Kuti. Femi’s father, Fela Anikulapo-Kuti, created the style a blend of traditional Nigerian drum patterns, the smooth groove of highlife and American soul, funk and R&B – and took it to the world, inspiring people with insistent dance beats and lyrics bristling with political statements. Afrobeat moved several generations of musicians, in Nigeria and around the world, to follow Fela’s dictum and use music as a weapon to fight for justice and freedom. Femi and his band, Positive Force, are at the forefront of that movement, continually expanding the music’s vocabulary, adding hints of punk and hip-hop to the sound, while maintaining its traditional roots and political message.

Femi recorded most of the album in chaotic Lagos, with musicians from Positive Force, and his son, Omorinmade Anikulapo – Kuti. His latest album One People One World (2018) sees Femi returning to the music’s African roots. Hints of reggae, highlife, soul, R&B and other African, Caribbean and African American flavors.