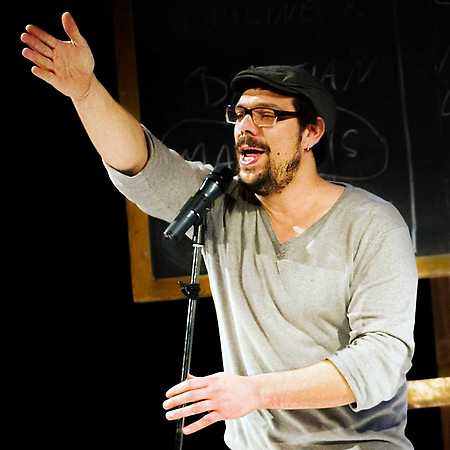 Felix Römer is a slam poet and presenter of poetry slams in Göttingen, Eschwege and Kassel. Felix Römer grew up in Goßfelden near Marburg. He is considered one of the pioneers of the German-speaking slam scene. In 1999, when the format was still very young in Germany, Römer traveled as a poet through the German-speaking countries and performed his poetry and prose at Germany’s first poetry slam events. Between 1999 and 2004 he was part of the permanent acting ensemble of the Goethe-Theater Wiesbaden. In 2006 he won the second place in the individual competition at the German-speaking Slam Championships in Munich. Together with Sebastian 23, Lars Ruppel and Gabriel Vetter, he formed the performative stage literature team SMAAT, which described themselves as the Slam-Boygroup. The quartet went on tour with several stage programs and they even released two CDs with SMAAT lyrics. Römer was a permanent member of several reading stages, among others at the Berliner Lesebühne berlinerWald. In addition, many of his texts have been published in anthologies and literary magazines. He moderates and organizes various poetry slams in Berlin as well as Hesse and Lower Saxony, for example in Eschwege, Kassel and Göttingen. Römer is also the leader of workshops on poetry slam and creative writing.