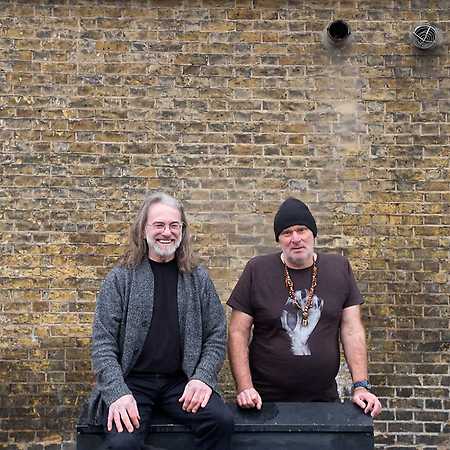 In 1971 Faust signed up with Polydor International, Hamburg, Germany. In their Wümme studio, Faust recorded three of their own albums plus two joint albums with the avant-pop trio Slapp
Happy and another album in collaboration with american minimalist Tony Conrad. Got kicked out of Polydor two years later. In 1973 Faust joined Virgin Records , releasing the album The Faust Tapes. Faust recorded Faust IV at The Manor studios/UK for Virgin. Got kicked out of Virgin a year later. In 1975 Faust recorded an as-yet-unreleased album at Giorgio Moroder‘s Musicland Studio , in Munich… and went underground for the next 15 years. By then Faust had become what Julian Cope described as “the most mythical band ever” and the most radical of all Krautrock bands.

Since 1990 Faust have toured extensively in Europe, the USA and the rest of the world, created their own label and produced numerous albums in London, Austin, Hamburg and Schiphorst.
Over the years and from gig to gig Faust’s line-up continues to vary – from trio to larger ensembles – with founding members’ performances often enriched by the participation of local musician.