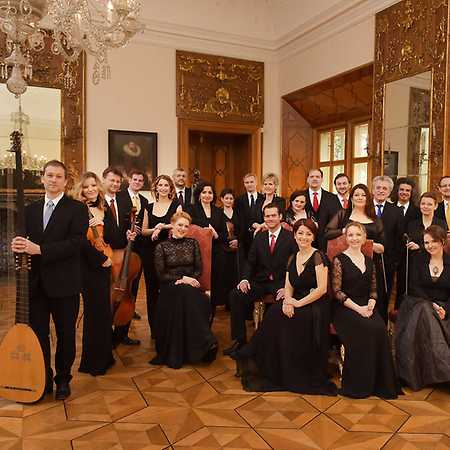 Ensemble Inégal is a versatile musical ensemble with a broad repertoire ranging from the music of the Renaissance to contemporary works. It gives concerts at leading Czech and foreign music festivals (Prague Spring, Musica Atiqua Brugy, Oude Muziek Utrecht), and it regularly appears on television and radio broadcasts (BBC, Czech Television, Czech Radio). Its recordings have received several prestigious awards (Diapason d’or, IRR Outstanding, Goldberg 5 Stars et al.). Since 2007, it has been holding its own concert series titled “Czech Baroque Music – Discoveries and Surprises”, introducing its listeners to newly discovered or rediscovered works by Czech baroque composers, with the music of Jan Dismas Zelenka at the forefront.

The organist and conductor Adam Viktora is the founder and artistic director of the Czech Organ festival and the artistic director of Ensemble Inégal and the Prague Chamber Soloists, with which he has given a number of modern-era premiere performances and recordings of the European Baroque repertoire. “The enormous wave of ‘authentic’ performing of early music in the latter half of the last century brought about extraordinary progress. In the last two decades, however, its task has changed greatly. Rather than freedom in the search for values in interpretation, generally very visible representatives of the musical mainstream are coming to the fore, and they are successfully presenting unerringly correct solutions. For this reason, each year Ensemble Inégal presents unknown Baroque music, and it has to its credit so many modern-era premieres of Zelenka because it does not wish under any circumstances to be part of that mainstream, and it is convinced that there is enormous power in music, but only until the moment when fear takes over, dictating proven solutions for interpretation that are guaranteed to be correct, until it uses celebrities just to fill concert halls and make money, or until it relies on proven repertoire that certainly won’t leave one dry eye in the house,” says Adam Viktora, explaining his ensemble’s vision. He appears regularly at music festivals all over Europe, and his great interest in historical organs is accompanied by lectures and concert performances at international congresses. He also serves as an advisor on expert committees for the restoration of important historical organs. He is one of the key figures in the process of the rediscovery of the music of the Czech Baroque composer Jan Dismas Zelenka.