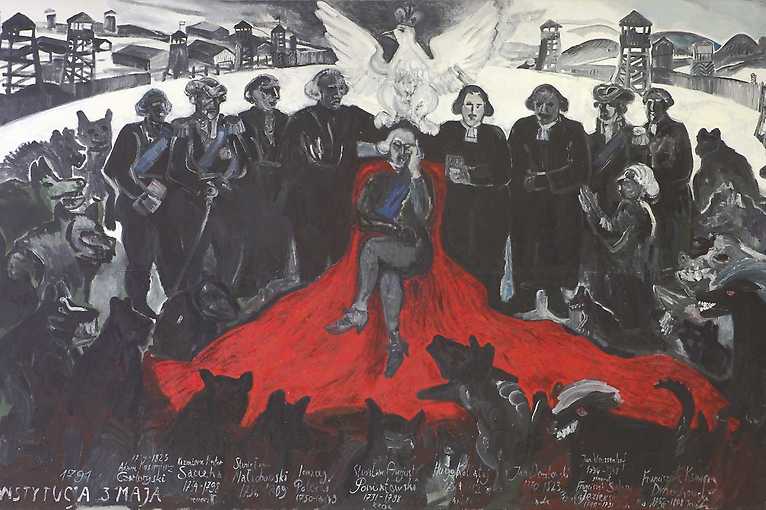 The most comprehensive retrospective ever of one of Poland’s most important and popular contemporary painters, the first since his death in 2018, will include over 450 works from sixteen museum collections and twelve private collections. The exhibition will be accompanied by screenings of two animated films directed by Andrzej Baranski, which were “painted” by Edward Dwurnik. During the exhibition there will also be a review of films on Dwurnik’s art and selected television interviews with the artist.

Edward Dwurnik’s artistic output is extremely rich – both in terms of quantity, with over 5,000 paintings (some sources say as many as 7,000, including series) and around 20,000 drawings and prints, and in terms of artistic quality of the highest order. In his paintings he referred to the works of, among others, Jan Matejko, Nikifor Krynicki or Jackson Pollock, as well as to German Neo-Expressionism of the 1980s. He grouped his works into thematic cycles. Nikifor’s primitivism was his first strong inspiration, which remained with him in the form of opposition against accepted aesthetic values. Subsequent cycles had clear characteristic features: Hitchhiking was full of the finest details and motifs, symbolically reflecting Polish reality; Robotnicy or Sportowcy perversely showed the realities of communist Poland, and Warszawa expressed the social unrest of the 1980s. The cycles Droga na Wschód and Od Grudnia do Czerwca touched on the difficult subject of victims of the totalitarian regime. In the 1990s came the “blue” stage of the artist’s work, including a series of several dozen semi-abstract paintings of the sea, and soon afterwards a fascination with purely abstract painting and the works of Jackson Pollock. The diversity of Dwurnik’s work was complemented by a phase of female nudes, which in turn was followed by the interpretation of Bitwa pod Grunwaldem. Artistic fertility, a multitude of interests and large formats of works – these are the hallmarks of this extremely singular artist. Edward Dwurnik was also famous for taking up great themes, and the subtitle of the retrospective – Polska – resonates just as loudly.

Tickets Save Saved Loading
No Hero at All Toruń, Centre of Contemporary Art in Toruń Tomorrow 13:00, and 4 dates

Tickets Save Saved Loading
The Crossing Toruń, Centre of Contemporary Art in Toruń Tomorrow 14:30, and 2 dates