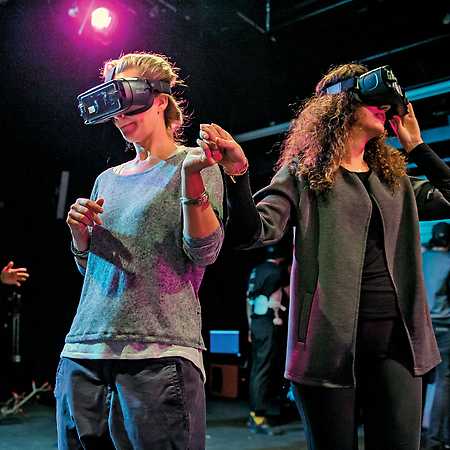 Space for interdisciplinary activities of the Dream Adoption Society collective. Dream Adoption Society is a multidisciplinary, virtual reality, artistic group based in Warsaw Poland. The collective was started by the theater director Krzysztof Garbaczewski to develop a digital way of expression, which combines virtual and augmented reality in the context of theatre and performance. So far the company has staged productions at the Powszechny Theater, Nowy Teatr, Komuna Warszawa in Warsaw, The Performing Garage – home of The Wooster Group in New York, the National Stary Theatre in Krakow, the Centre for Contemporary Art Ujazdowski Castle in Warsaw, as well as several other venues in Poland, and Germany. The individual members of the team’s credits includes many theater productions, AAA Computer games, videos, feature films, animation films, 360 degree videos, and dramatical Virtual Reality Productions. They are based in the same building as Teatr Powszechny, with a separate entrance.