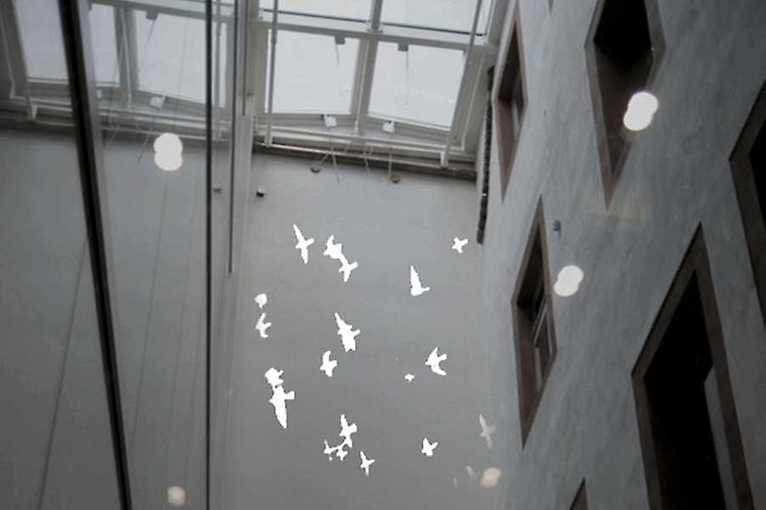 The term Air Wants To Go was borrowed from the poem The Chess Player by American poet Howard Altmann – a poem about the abandonment and transformation of man in relation to the world. It is also the title of one of Dominik Lejman’s latest works, a diptych that makes Howard Altman’s verses seem to disappear. During the exhibition at OP ENHEIM, five complex works by the award-winning Polish artist will be on display, accompanied by a facade projection during the first three evenings of the exhibition.

Dominik Lejman’s art is based on the phenomenology of time, a totally confusing phenomenology of duration and repetitiveness. The world of image reveals a different world of duration. In the combination of abstract painting with geometric structure and temporary video projection, Dominik Lejman weaves into painting a narrative – fabric and texts, “fences” of doubt between disclosure and rejection, uplift and downfall, Elizjum and prison. The individual aesthetics of painting and the mechanization of projection reminiscent of Marcel Duchamp, make it possible to intertwine the visible and the invisible. Duplications and palimpsest-like superimpositions, the appearance and hiding of bodies, ghostly unveilings and obscurations, permeate this equally incredible and phenomenal art. With the help of Samuel Beckett, whose soul mate Dominik Lejman is, this art can be described as the “art of imprisonment”: Endless unveiling, curtain after curtain, layer after layer of incomplete transparency, re-discovering things to the very endless, to nothingness.