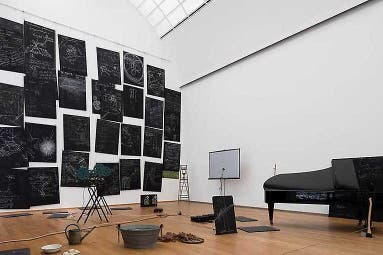 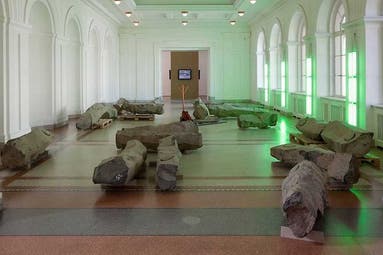 The collections of the Nationalgalerie exhibited at Hamburger Bahnhof, trace artistic currents from 1960 to the present. The presentation of the Marx Collection with works by Joseph Beuys, Andy Warhol, Robert Rauschenberg and Cy Twombly, among others, has always had a special status; alongside the holdings of the National Gallery with important works by Dieter Roth, Bruce Nauman or Carolee Scheemann.The museum’s exhibitions and programs emphasize the interdisciplinary nature of contemporary art.

*Marx Collection – Joseph Beuys.
Major works by Joseph Beuys are on view in the museum’s west wing, including The End of the 20th Century, Tram Stop, Unschlitt, and Judging Forces of a New Society. Other works by Beuys can be found in the Kleihueshalle.

*Sculptures in the outdoor space
Sculptures and installations by Georg Baselitz, Urs Fischer, Robert Indiana, John Knight, Bruce Nauman, and Franz West are on display in the museum’s outdoor space. Also on view is a light installation with fluorescent tubes by the U.S. artist Dan Flavin, which were specially designed for Hamburger Bahnhof in 1966.