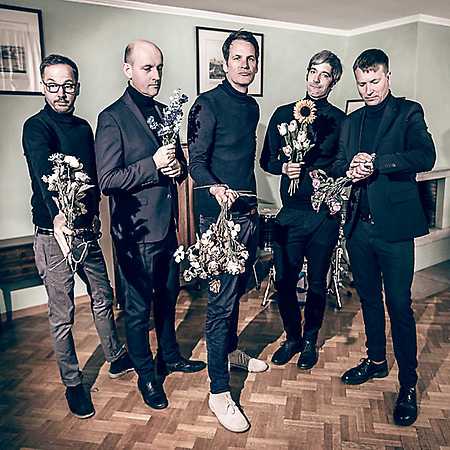 Die Liga der gewöhnlichen Gentlemen is a German pop band from Hamburg and Berlin.
The band was formed in 2012 after singer and songwriter Carsten Friedrichs' old band Superpunk broke up.
Next to Friedrichs, Tim Jürgens is another ex-Superpunk musician, who is playing in Der Liga der gewöhnlichen Gentlemen. Philip Morten Andernach (guitar, saxophone), Tapete Records owner Gunther Buskies (keyboard, saxophone) and Christoph Kähler (aka Zwanie Jonson) on the drums, complete the group.

The band’s first release was the 7"single Die Gentlemen Spieler. The debut album Jeder auf Erden ist wunderschön was published in 2012.
The album Alle Ampeln auf Gelb! followed in 2014. The title track revolves around Peter-Ernst Eiffe, who was the first graffiti artist at then end of the 60s. The song Kennst du Werner Enke? was released as a vinyl single and is a homage to actor and filmmaker Werner Enke. During a concert in Bremen, Werner Enke was on stage with the band and played the drums.

In 2015 Heiko Franz (Cucumber Men, Splashdowns) took over on the drums.
In January 2016 the band released their third album Rüttel mal am Käfig, die Affen sollen was machen!. A year later It’s OK to Love DLDGG was released and debuted on number 60 on the German album charts.