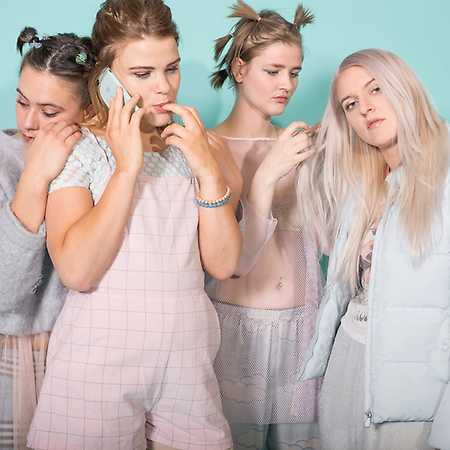 Even though originally formed in 2012 as a thrash metal/pop/rock/disco concept, Cyber is now known as the ongoing experimental hip-hop and electronic project of Salka Valsdóttir, Jóhanna Rakel and Þura Stína. The band was named after a lipstick that Salka and Jóhanna found themselves rocking when they became best friends at sixteen. Even though the lipstick is now totally lame, the band has flourished. Before taking Cyber off the ground the trio had previously gotten recognition for their work with the now world renowned super group Reykjavíkurdætur where they released tracks such as Hæpið and Fiðringur. From 2016 Cyber have released four projects: Crap which contains 7 tracks, some of them pumped, some of them sad and nostalgic but all of them a bit weird, Boys a three song EP that is a tribute to cute Russian boys.

Their first LP Horror which is a thirteen song horror concept album released by Sticky Records, a leading hip hop label in Iceland. Horror won the Kraumur Awards in 2017 for album of the year, was voted best hip hop album by the MBL Icelandic newspaper and got nominated for the Icelandic Music Awards. The latest edition to this impressive catalogue is the seven song EP Bizness a concept album set in the hypothetical office of Cyber incorporated. Cyber works closely with the graphic designer Gréta Þorkelsdóttir, who has overseen all album covers and most visual aspects for the group except for the live visuals who are designed and run by Gabríel Benedikt Bachmann.