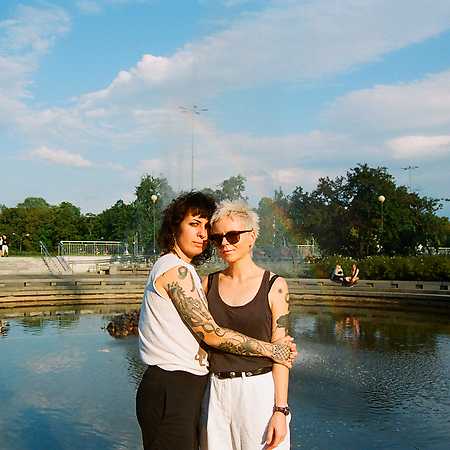 Cudowne Lata is a Warsaw-Krakow music duo made up of Ania Włodarczyk and Amina Dargham. The band was formed in the summer of 2018. In the autumn of the same year, Wonderful Years released their self-recorded EP Demo with dreamy and romantic songs that captivated the audience during numerous club concerts. In April 2019 the first single announcing the album was released – a song called _ Zapch i ty_. This indie-pop, slightly nostalgic song, referred to by Porcys as the “national single of the year”, along with the accompanying music video by Jakub Żwirełło, was warmly received by audiences and radio stations including Trójka, Czwórka, Off Radio Kraków and Akademickie LUZ radio. Pre-premiere material Wonderful Years appeared on Stage Three during the Off Festival 2019. At the beginning of September 2019 the second single Wonderful Years appeared titled Po szkole. Kółko i Krzyżyk is the band’s debut album, which premiered on September 26, 2019. Melodious vocals with Polish lyrics, hit guitar solos and synth-pop tracks – this is a short description of nine songs that can be found on the album. The whole is arranged in a kind of story including on the Polish 1980s and 1990s, filtered through the personal experiences and musical fascinations of the artists.