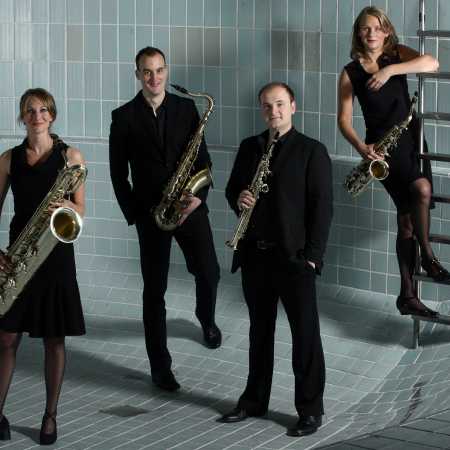 The Clair-obscur saxophone quartet is a collective of four outstanding performers fond of experimenting and of blurring the boundaries among musical genres. Apart from works written directly for saxophone quartet they enrich their repertoire with many arrangements they have made themselves of pieces in the most varied styles. The diversity of moods in their presentations is expressed symbolically by the ensemble’s title, which is the name of an old painting technique working with contrasts between light and darkness. The quartet concentrates mainly on performing chamber music, but also engages in music theatre ranging from ballet to cabaret. It has already appeared in numerous important venues in many countries of Europe as well as in New York’s Carnegie Hall. The members also play in classical orchestras such as the Berlin Philharmonic.