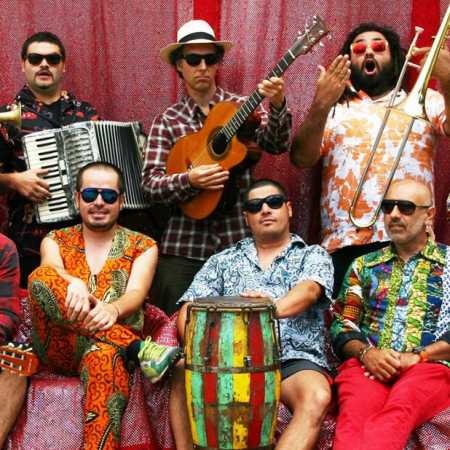 Chico Trujillo are a New cumbia band merging cumbia, ska, reggae and rock, among other styles. The band formed in 1999 in Villa Alemana, Zona Central, Chile. Chico Trujillo means ‘Little Gangster’. The band was formed out of the ska punk band LaFloripondio and was originally more guitar orientated. Chico Trujillo’s first songs were born of jamming sessions with Asenjo and his friend Antonio Orellana, and their sound gradually attracted new members to the band. After they added a brass section the style changed to become more cumbia. This lineup led to their first album, Chico Trujillo y la Señora Imaginación, in 2001.

Chico Trujillo has performed concerts at universities, musical venues, festivals and various events, including the Cumbre Guachaca Chilena at Estación Mapocho and concerts campaigning for the rights of the indigenous Mapuche. They have also featured on the Lollapalooza music festival lineup in both Santiago and Chicago.

Chico Trujillo has also gained a considerable following in Europe, in particular Germany.