Čechomor is a Czech band founded in 1988, initially as a loose association of musicians playing folk songs and formed the first Czech-Moravian independent music company. After 1994, the group moved from a purely acoustic approach to electrical form. After the release of their third album, they shortened their group name to Čechomor. During their tenure, Čechomor toured throughout all of Europe, North America and Russia performed in theaters such as Palmovka, Forman Brothers, Continuo Theatre and others.

In 2001 Čechomor won three Anděl Awards (as a band of the year, for the album Proměny and for the song of the same name). The band has toured not only at home and in Slovakia, but also throughout Europe, North America, Australia and Asia. Čechomor has collaborated with several prominent music producers (Ben Mendelson, Gerry Leonard) and performed with several symphonic ensembles, the Japanese musician Joji Hirota, the American songwriter Suzanne Vega and many other artists. With guest singer Martina Pártlová the leaders of the band, František Černý a Karel Holas, have worked hard on a new modern sound, more distinctive arrangement and on a new repertoire. This is highlighted by the last album Nadechnutí (2018). 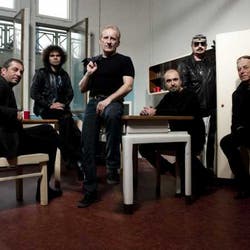