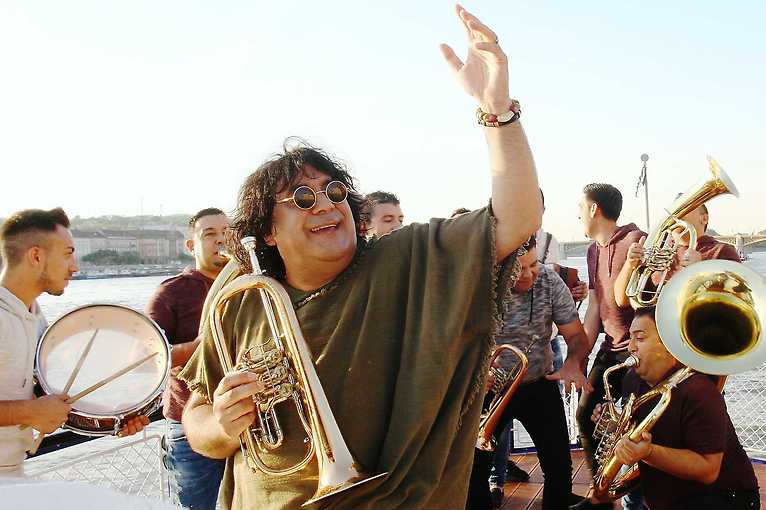 Boban Marković Orkestar will play in Wrocław. One of the most important Balkan brass bands is coming to Wroclaw to promote its latest album. Songs from the album Mrak, released by the Fono label in 2019, quickly found their way to the top of the world’s European charts, receiving very positive reviews. Thanks to both new and old songs, Boban Markovic – trumpet virtuoso and Balkan music scene legend – will conquer the whole world together with the band in 2020. Boban Marković was born on May 6, 1965 in Vladicin Han, southern Serbia, where the majority of the population consists of Roma, an ethnic group with a rich musical tradition. Boban received his first trumpet at the age of 5. As he matured, Boban dreamt of becoming a professional footballer, which his father did not like. When he was ten years old, he heard from him that his destiny was to play the trumpet. Marković began to play at his father’s Dragutin concerts and weddings, where the orchestra performed. He often played until he was exhausted. When he was 16 years old he was already a professional musician and 4 years later he formed his own orchestra. The breakthrough in his career was his performance and victory in Guca, where the most important festival of wind instrument music in the former Yugoslavia takes place. There is nothing more satisfying for Serbo than being called the “first trumpet” of the Guca festival. Boban received this title six times, until 1995, when he received the Trumpet Master’s Award, which every musician in the Balkans dreamed of. In 2006 Markovića was elected Ambassador of the festival, which made him one of the most important personalities on the wind instrument scene in Serbia and abroad. For the young and talented Boban, the door to an international career was opened. The award-winning film director Emir Kusurica and the most popular Balkan composer Goran Bregović invited Marković to record the soundtrack to the films Underground and Arizona Dream. One of Boban’s greatest achievements was the British magazine Song List’s inclusion among the 50 best instrumentalists in the world. Boban’s international career began in 1999. Since then, he and his orchestra, including his son Marko, have performed throughout Europe, the United States and Israel.