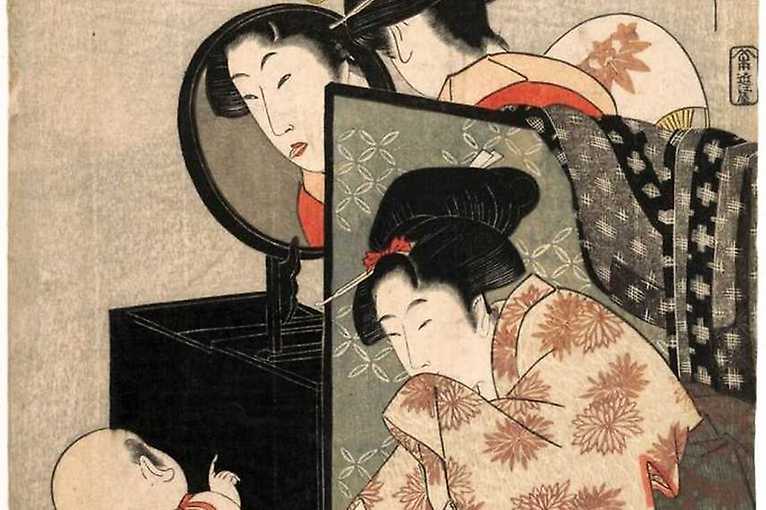 Bijing-ga ((jap.美人画), or portraits of beautiful women, is a type of depiction often appearing in Japanese woodblock prints of the Edo period. The style’s name comes from the word “bijin”-beautiful and “ga” meaning picture. The paintings of beautiful women are unusual representations that give us a glimpse into the everyday life of women during the Edo period. The term is most often associated with the ukiyo-e current, and Kitagawa Utamaro was one of the few artists of the period to devote extraordinary attention to bijin-ga, bringing his “beauties” to a masterful level. The models do not pay attention to the artist portraying them, they are occupied with themselves and their world – they comb, bathe, and help their companion in everyday toileting. What did the housework look like? What was the makeup like, how did the canon of beauty change? We cannot forget that this is also an erotic style: among bijin-ga reigned portraits of courtesans or oiran. Who were the residents of Yoshiwara, the pleasure district? What clothes did they wear, what were their customs and why did they inspire artists so much?

*Hosted by:*Maja Wolniewska – art historian, curator, critic. Author of numerous publications and reviews, she cooperated, among others, with Szum magazine and the Niezła Sztuka portal. During her MA studies she conducted research on Japanese aesthetics and sense of beauty, basing her research primarily on ukiyo-e woodcuts. Her fascination with Japanese art was sparked by the exhibition Utagawa Kuniyoshi. In the World of Legends and Fantasy, organized by the National Museum in Krakow in 2011. Since 2019, she has been associated with the Artistic Journey of Hestia Foundation, where she is primarily responsible for the exhibition schedule at the ERGO Hestia Art Pavilion and the Foundation’s art branding program.