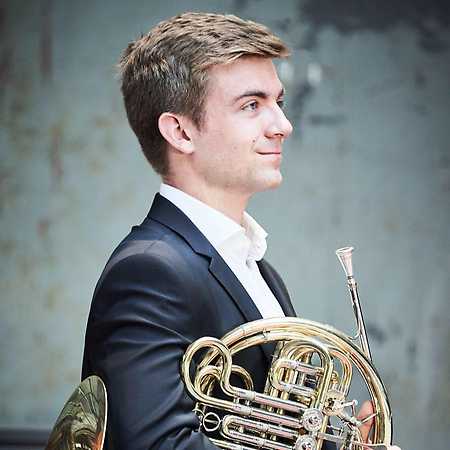 A French horn player described as a musical Bear Grylls (Huffington Post, May 2016), Ben has quickly emerged as one of the most exciting horn players of his generation. Winner of the Brass Category Final in the 2016 BBC Young Musician Competition, at London’s Barbican Hall, where he performed Strauss Horn Concerto No. 2 with the BBC Symphony Orchestra under Mark Wigglesworth. Ben Goldscheider has made his concerto debuts at venues including the Berlin Philharmonie, Lucerne Culture and Congress Centre and London’s Royal Albert Hall. He has also appeared as soloist with the Lucerne Symphony Orchestra, Aurora Orchestra and City of London Sinfonia. In 2018 Ben released his debut album with Willowhayne Records to critical acclaim, and was selected as BBC Music Magazine’s “Rising Star” and Gramophone Magazine’s “One to Watch”.