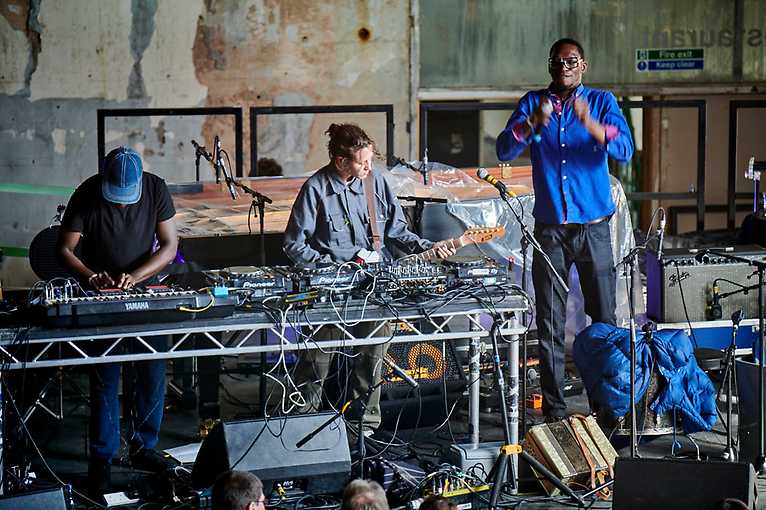 Curl and Bob Vylan’s performances and the showcase of the Oramics collective and the label Pointless Geometry.

The London-based music collective CURL, which also acts as a label, spans everything from hip hop and grime to jazz, electronic soundscapes and the avant-garde. In other words, quite an eclectic phenomenon that rarely moves into regular performance art and other inter-artistic collaborations. Rather than playing normal concerts, CURL acts are a curatorial work which is accustomed to putting together special courses and constellations for each show they make. This has previously been seen in London’s Institute of Contemporary Art, Southbank Center and Berlin’s Leading Club Transmediale Festival. CURL, or otherwise, Mica Levi, Coby Sey i Brother May.

London based two-piece punk band, Bob Vylan, pronounced Bob Villain, incorporates hardcore punk, rap and grime all into one disgustingly macabre but honestly beautiful package. In the absence of humility, they match Death Grips and JPEGMAFIA. Released in March, Dread EP meets all expectations associated with earlier recordings and performances – sharp riffs, punk rap, grime tracks, thrashing hardcore full of aggression and negative overtones along with a trashy climate and Rasta asides make for perfect revolutionary punk manifestoes. A true D.I.Y. with “no outside help whatsoever”.

Oramics was created as a platform to empower women, non-binary and queer people in the electronic music scene, then it evolved into an independent booking agency representing FOQL, Mala Herba, dogheadsurigeri, Monster, ISNT, Avtomat and Olivia. From the start their goal is to support beginners who spin records and those who perform live, as well as create a friendly scene in Poland. They want to build an encouraging environment both for the experienced performers and for those who are just starting out, so that they can be supported in that process. They are all about creating a platform, thanks to which the audience will recognize them by their talent. They want to promote unique and talented people, however, they are also ready to offer methodical and practical help to individuals who are just starting their music adventure.

Bob Vylan  Fighting By The Church