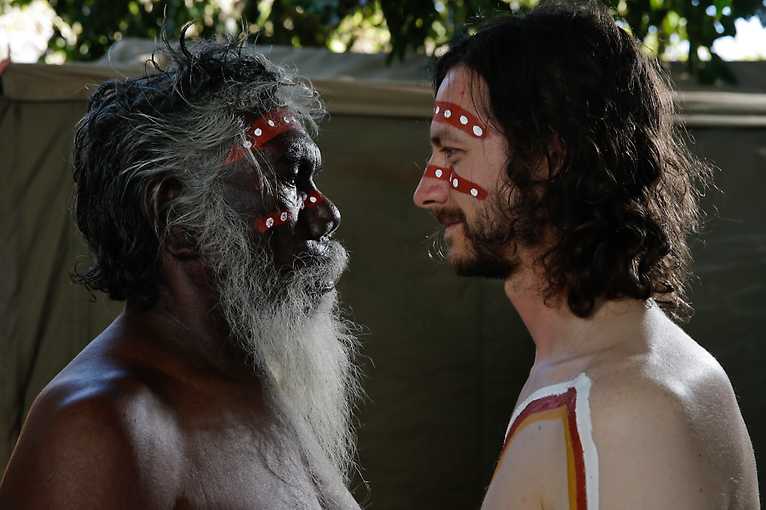 In spite of all the lockdowns, will be possible to choose from nine cinema hits from both Australia and New Zealand which will screen on the dafilms.cz online movie platform from 19 to 29 November, 2020. Online festival will showcase new releases as well as a selection of the “best of” from past festivals.

The New Zealand action feature Guns Akimbo is a must for lovers of computer games, sci-fi or Daniel Radcliffe. As Miles Lee Harris, he portrays a bit of a nobody who is dumped by his girlfriend, so he now spends all his time hidden away at home, programming computer games. That is, until an unexpected visit forces him into a game for real. But this time he is playing for his life.

Another well known star, Australia’s Hugo Weaving, will appear in Aussie and Kiwi festival‘s online line up in two great films and two very different roles. The first one, the drama Hearts and Bones shines a spotlight on the very current global theme of immigration. Anyone who knows the story of Australia’s most famous outlaw bushranger, Ned Kelly (an Australian version of Jessy James or Jánošík) will certainly not want to miss this new adaptation of his story called True History of the Kelly Gang. It‘s a fresh take and interpretation of the bandit´s life.

The best of Aussie & Kiwi In the box office hit The Dressmaker on the other hand, audience will love Hugo Weaving in the role of a cross dressing police officer of a small country town, starring alongside Kate Winslet and Liam Hemsworth.

The movie The Little Death is an original comedy about sex, love, relationships and the secret desires of some very average people living in a quiet suburb in Sydney. The film Sweet Country on the other hand is a magnificent Australian western about violence and racism trapped deep beneath the surface.

Called The Blondini Gang on social media, they fight for animal rights and this is their story – three random young accidental outlaws in a stolen Mini Cooper chase across New Zealand in search of a long lost love. This is the comedy road movie Pork Pie which launched the Aussie & Kiwi Film Fest in 2018 and gave audiences at the sold out Lucerna cinema not only a virtual tour of New Zealand’s beautiful landscape, but also a feel good movie about love, friendship and adventure. A “best of” selection wouldn’t be complete without the visually magnificent documentary Blue which shows up close the impact of humans on ocean ecosystems. This documentary chronicles not only human impact on ocean life but also the work being done by many around the world to try to help the oceans and its animals.

The documentary feature Westwind: Djalu’s Legacy is for all lovers of indigenous Aboriginal culture in Australia but not just them. Documentary filmmaker Ben Strunin befriends an Aboriginal elder who is seeking to pass on the mystical knowledge of the
Dreamtime stories to his son and family. How do indigenous communities cope with colonisation that has been going on for centuries? Are original cultures being lost, or can they be kept alive through Western culture? This is a beautiful and uplifting documentary
that delves into the story of a particular indigenous tribe and how its culture is passed on through the didgeridoo.

More about the Aussie and Kiwi Film Festival at: www.aussieakiwi.cz