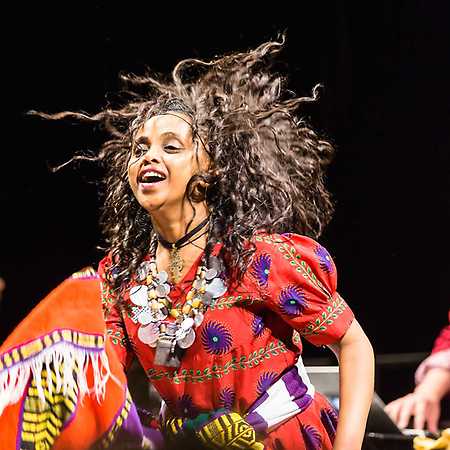 “Ethiobraz” is a meeting of Paal Nilssen-Love’s Large Unit and Ethiopian dance/music
ensemble Fendika. They first got together at Molde Jazz Festival in 2018. Joining them as a special guest was guitarist Terrie Ex, who, with his long involvement with the Ethiopian music scene, played a key role in making the meeting happen. In fact, Paal Nilssen-Love’s first visit to Ethiopia in December 2009 was with Terrie and The Ex. This changed his life. Another enduring influence on his (musical) life was his first journey to Brazil in June 2013. During numerous trips to these two countries, Paal established many contacts with musicians, dancers, presenters, clubs and schools. The music he created for Large Unit, which was established right after his first trip to Brazil in 2013, was heavily informed by these travels and meetings. The fusion of these influences with the Scandinavian free music sensibility is an important component of Large Unit’s sound.
Large Unit’s fifth anniversary was the right time to bring all these sources together and celebrate not just the band, but also the collaborations with musicians and dancers from both Ethiopia and Brazil. Thus Ethiobraz was formed, with 22 musicians and dancers together on stage. It has produced the most accessible music in the Large Unit catalogue, and there is no doubt that hearing them live will make you want to get up and dance. The concert in Molde resulted in an album, which was released in December 2019