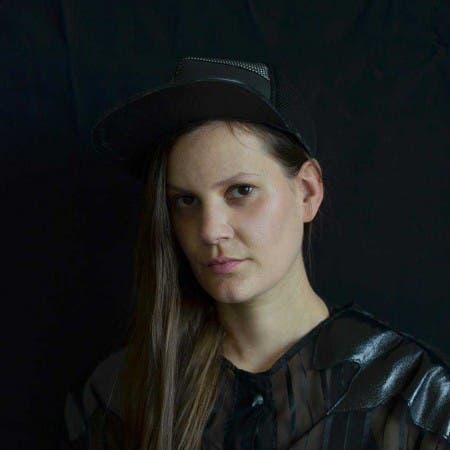 The work of Anežka Hošková can be linked to the international current of mythical, associative painting or drawing and post-Internet aesthetics. It is formed through dialogue with artists pursuing this orientation on the Czech as well as international scenes. Nevertheless, in addition to the rather formal similarities Hošková developed an original style, which is not only connected to the means of expression in the sphere of contemporary art but also with her interest in alternative music and DIY culture, fashion or the layering of image-textual information on social media. Her work freely penetrates through all these areas, which often serve as a source of inspiration for her thematically as well as mechanically challenging works. From the exhibition of paintings and installations Hošková’s work mutates into the posters for the music festival Creepy tepee, which she co-organizes, or it transforms into a daily whirlwind of pictures downloaded from the Internet or found in old magazines through the layering of which Hošková’s Facebook page, as well as the “visual database” in her studio, become a thaumaturgic synthesis of eroticism, peculiar styles, cats, religion symbols and bizarre situations, which are often used as a flashing background for her DJ performances, or that close the circle by returning to the gallery environment remodelled into a series of collages photographed on a mobile phone (Tropical Winter, 2013). Last but not least, Anežka is her own creation with her iconic appearance that is the missing piece of the entire jigsaw puzzle.