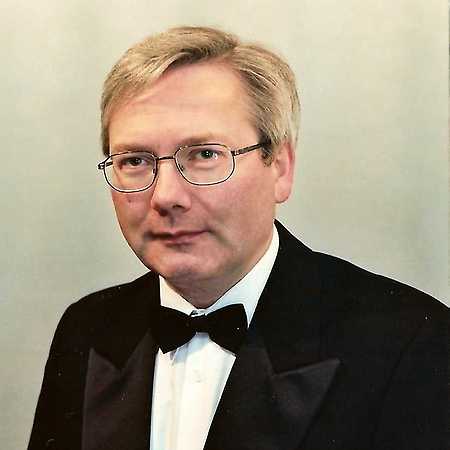 He studied piano at the Musical Secondary School. In 1973, he began learning to play the organ, first privately and then at the Academy of Music in Kraków under the supervision of Prof. Joachim Grubich. In 1981 he received the first prize in the International Organ Competition in Rome. In 1985, he was awarded first prize in the framework of the National Organ Competition in Bydgoszcz-Gdańsk. He took part in most Polish organ festivals and he also performed in most of Europe, as well as Lebanon and both Americas. He has been active as a teacher – the professor of the Organ Department at the Academy of Music in Kraków and the Władysław Żeleński State School of Music in Kraków. He collaborates with numerous music ensembles including Cracow Philharmonic and National Philharmonic in Warsaw. He performed complete organ works of Johann Sebastian Bach in the season 1990/91 and in the Jubilee Year 2000. He also presented an anthology of organ music of the 16-20th centuries in a series of 20 concerts under the common title Ars organi in the years 2001-2002. In 2006 he was awarded a silver medal „Gloria Artis” by the Polish Minister of Art and Culture. The album with his participation Stanisław Moniuszko (1819-1872) Masses vol. 2 received the Fryderyk 2009 Music Award in the category Album of the Year for Choral and Oratorio Music. The album Stanisław Moniuszko – Masses, vol. 2 received a nomination to the Fryderyk 2011 Music Award in the same category. In his diverse and ever expanding repertoire, embracing all styles, the artist has also performed the complete organ works of Dietrich Buxtehude, Nicolaus Bruhns, Felix Mendelssohn Bartholdy, César Franck, Franz Liszt and Johannes Brahms. Several of his recordings became a precious contribution to the tape archives of the 2nd channel of the Polish Radio.