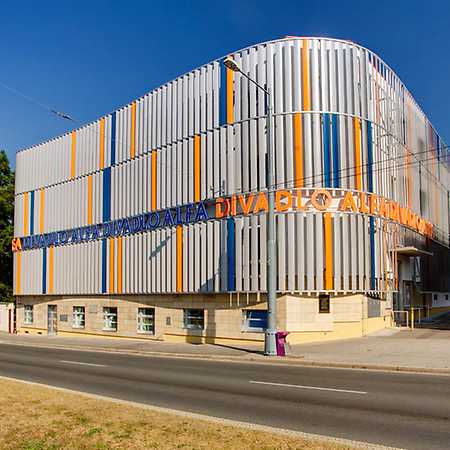 Alfa Theatre’s direct forerunner, the Children’s Theatre, opened in September 1966 in the ALFA premises on Americká street. In 1992 it moved to a modern building at Rokycanská 7, and changed to its current title. It is maintained by the City of Pilsen.

Since the beginning of 2015 its managing director has been MgA Jakub Hora. The theatre’s current creative team (artistic head and director Tomáš Dvořák, dramaturg Pavel Vašíček and set designer Ivan Nesveda), together with external colleagues and the ten-member company of actors, favours a comedic concept of theatre, continuing to view the puppet as a dominant and unusually attractive stage phenomenon. The theatre addresses a broad audience – children, young people and adults – offering all of them an alternative to the dominant media culture. This alternative provides literary and artistic quality, original staging techniques (all sorts of puppet techniques in combination with live actors) and a synthetic stage form, in which music (often live) always plays an important role – and all in a truly cultural environment. The repertoire is varied in both theme and genre, from classic and modern fairytales to world drama.

Since 1970 the theatre has undertaken over 100 foreign tours, mostly in the last ten years. It has visited Austria, Belgium, Bulgaria, Canada, Denmark, France, Finland, Germany, Hungary, Israel, Italy, Japan, Luxembourg, the Netherlands, Norway, Poland, Portugal, Romania, Slovakia, the Soviet Union and Russia, Spain, Switzerland, Tunisia, Ukraine, the United States and Yugoslavia and its successor states of Slovenia, Croatia and Serbia. Indeed, it has visited some of these countries several times. Since 1967 the theatre has been the joint organiser of the SKUPA’S PILSEN festival, the thirtieth year of which took place in June 2014.

The JK Tyl Theatre in Pilsen