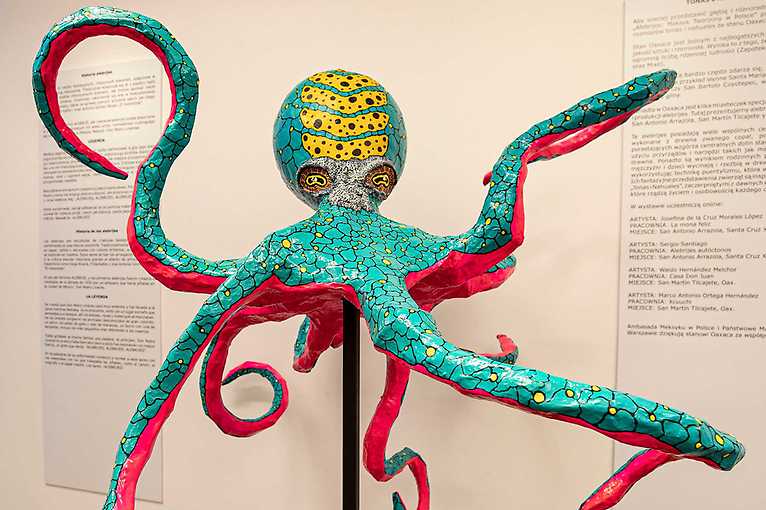 Legend has it that Don Pedro Linares, during a serious illness, dreamt of a forest inhabited by animals that were hybrids of a dog and a rooster, or a donkey and a snake. When the artist recovered, he immediately began to recreate them with cardboard, paper paste and papier-mâché. Where did the name Alebrijes come from? Apparently it was shouted to him by the fantastic figures in his vision. Another Mexican artist, José Luis Massey Aguirre, says that the many parts that make up the alebrijes are in harmony with each other because they express balance and the presence of a dormant force. In such an unexpected way, a poetry emerges that we are unable to perceive in the objects around us, and the immense unpredictability makes us wonder.

The exhibition is held annually during All Saints' and All Souls' Days in Poland and Death Day in Mexico. The rituals, in both cultures, associated with these celebrations are meant to help people come to terms with what is inevitable and mysterious. The most representative elements of the Day of the Dead in Mexico are the altars, which represent the Mexican vision of death, full of allegory and meaning. On the Day of the Dead, Mexican families place altars in their homes to honor their loved ones. Also on display at Alebrijes: Mexico Created in Poland is an altar that this year is dedicated to Ewa Demarczyk. Courtesy of the family, the museum has received an original photograph of the artist, which will be placed on the altar on Friday 30.10 before All Saints Day. The exhibition Alebrijes: Mexico Created in Poland is realized thanks to a project that has been ongoing for five years. It is the result of cooperation between two institutions: The State Ethnographic Museum in Warsaw – in Poland, and the Museum of Folk Art in Mexico City, on the initiative of the Mexican Embassy in Warsaw. Thanks to this project, it is possible to see the universality of Mexican folk culture, which, apart from being presented in international galleries, can be reproduced and assimilated in other latitudes.

Upon the Vistula River, in Urzecze Warszawa, National Ethnographic Museum in Warsaw sun 22/8