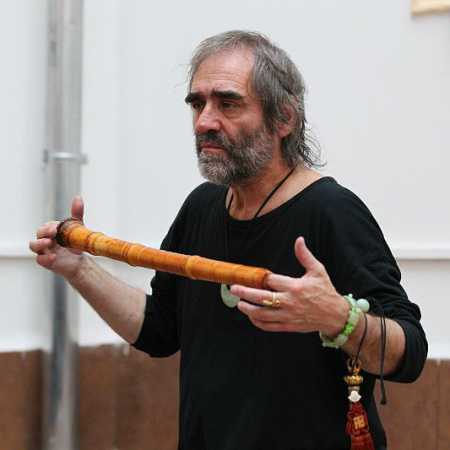 Czech composer and ethnomusicologist Vlastislav Matoušek completed a postgraduate course in composition and music theory at the Academy of Performing Arts in Prague. In 1996, a scholarship Japan Foundation studied the shakuhachi at Kifu Mitsuhashi in Tokyo and Japanese traditional music at the University of Letters in Osaka. The Academy of Performing Arts defended his dissertation Kinetics in ethnic music and earned a doctorate in music theory – the theory of composition and in 2004 was appointed associate professor. Since 1991 he has taught ethnomusicology in the Department of Theory and History of Music Academy of Music, since 1999 at the Institute for Musicology of the Faculty of Arts of Charles University in Prague and works as a music journalist with Czech Radio. In his music, he worked in practice 80 years in the alternative rock band Mama Bubo as a bass player. This facility also played in 90 years in the file before your BC and Yamabe, which applies practices of ethnic music and modern classics to rock aesthetics. Most often, however, performs with Japanese traditional flute shakuhachi, whether as soloist, ensemble member Relaxation (s Mazankou George and Charles Babuljak) facing Asian classical music and the occasional reports focused on the fusion of folk music and jazz. From 2012 he began to work with clarinetist, saxophonist and fujaristou Michal Hruby (Jazz Khonspiracy, small breathing exercises, three tenors and bass), saxophonist John Grunt (small breathing exercises, three tenors and bass), bassist Peter Pacific (Bran), percussionist Jaroslav Koran and others. In addition, he also východočeskému folklore (played on various types of bagpipe) and medieval music. – Translated by Automatic service