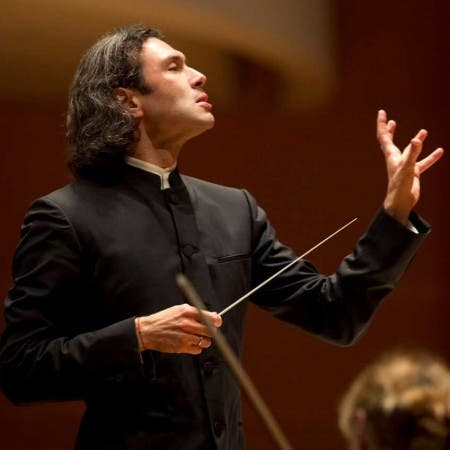 Born in Moscow, Russian conductor Vladimir Jurowski studied music at academies in Dresden and Berlin. He first attracted major attention in 1995 conducting Rimsky-Korsakov’s opera May Night in the Wexford Festival and Verdi’s Nabucco at London’s Covent Garden. In 2003 he was named chief guest conductor of the London Philharmonic Orchestra, and four years later he became its principal conductor, in which post he continues to this day. He also appears regularly as a guest with other renowned orchestras of the world, such as the Berlin Philharmonic, the Royal Concertgebouw Orchestra, the Tonhalle Orchestra of Zürich, the Leipzig Gewandhausorchester, and the Staatskapelle of Dresden. In addition he is very fond of conducting operas, having led for example Rigoletto, Jenůfa, and The Queen of Spades at the Metropolitan Opera and Eugene Onegin in Milan’s La Scala.