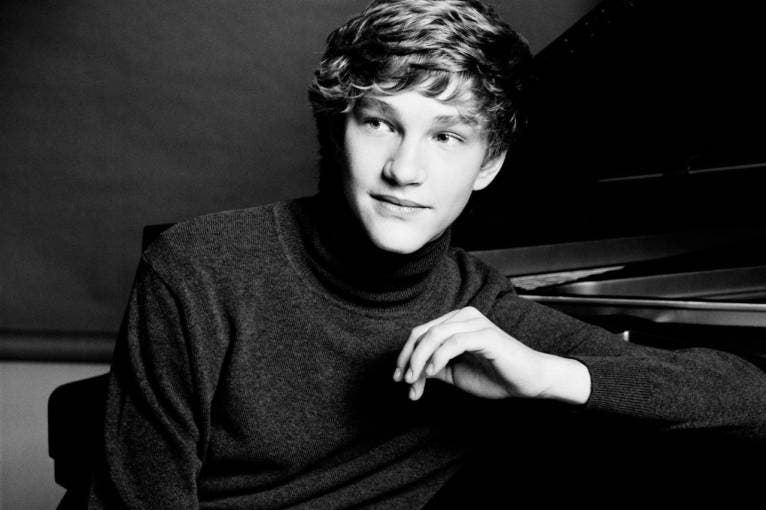 The phenomenal Canadian pianist Jan Lisiecki first thrilled the public with a performance of Schumann’s Piano Concerto in A minor Op. 54 in 2013, when he made his debut at the famed BBC Proms. And this was also the concerto that he included on his third album, published in early 2016 on the prestigious Deutsche Grammophon label. That recording, on which Lisiecki is accompanied by the Orchestra dell’Accademia Nazionale di Santa Cecilia under the baton of Sir Antonio Pappano, has received enthusiastic reviews from critics all around the world. It appears that the Schumann Piano Concerto is playing an important role in Lisiecki’s brilliant career. The many successes he already has to his credit are increasing the eager anticipation of his Prague Spring debut.

Robert Schumann (1810–1856) composed his only piano concerto between 1841 and 1845. The composer, whose promising career as a concert pianist had been ruined by the injury of a finger on his right hand, wrote the concerto for his young wife, the outstanding pianist Clara Schumann, who premiered it in January of 1846. The first movement, which begins with a lovely, lyrical theme in A minor, had already been composed in 1839 as the Phantasie for Piano and Orchestra, but at his wife’s request, Schumann added the second and a third movements, which are played without a break, so the romantic melody of the Intermezzo gives way to an energetic finale in triple meter. Because virtuosity is kept in the background deliberately, the work is more of a vast musical poem than a concerto in the traditional sense of the word, and in it the passages for piano solo are amazingly integrated with the orchestral accompaniment.

The evening’s programme opens with the stirring overture to the opera Prodaná nevěsta (The Bartered Bride) by Bedřich Smetana (1824–1884), a piece that demands extraordinary virtuosity from all of the sections of the orchestra. The conductor Karel Ančerl was fond of performing the piece. The present principal conductor of the Toronto Symphony Orchestra chose the work in reference to the dedication of the concert to Ančerl, who was at the orchestra’s helm from 1969 to 1973. The Concerto for Orchestra by Béla Bartók (1881–1945) is one of the most frequently played and recorded orchestral works of the twentieth century, and rightly so. Like the overture to The Bartered Bride that opens the concert, the closing work on the evening’s programme places demands of the highest order on the orchestra.

3:16 2 ×
Jan Lisiecki  On The Uniqueness Of The Piano And Practicing It Early In The Morning