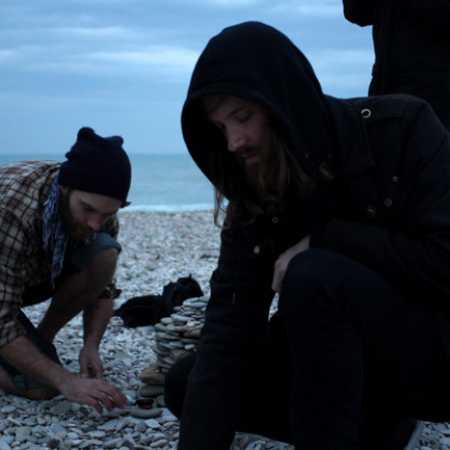 The initial incarnation of Timber Rattle had its roots in a Seattle recording studio in the winter of 2009 where Adam Parks and Brian Markham were introduced while contributing to A Story of Rats' “Thought Forms” LP. Both were involved in other Seattle psyche/noise projects at the time (Land What Land and Ear Venom) and were energized by the discovery that they shared not only a common interest in place-inspired music and sound experiment, but also a common musical and geographical background, having been born not a hundred miles from one another in the Blue Ridge Mountains of southwestern Virginia and raised singing Southern Baptist hymns. Though it wasn’t until they found themselves in New York (Markham pursuing psyche-rock project Ancient Sky, and Parks an agricultural livelihood) that they came together to write and record the first songs that would come to characterize Timber Rattle.

Shortly thereafter, they embarked on their first European tour and, upon returning, recorded Timber Rattle’s first full-length record, Nature in Darkness. In the following year, the duo toured in the northeastern U. S. and again in Europe, supporting Ancient Sky and Little Gold. In late 2011 Parks relocated to the west coast, reworking and releasing some latent material as the The Embers Burn in Code EP, upon which he and new recruit Jarrell Puryear again toured Europe. In the summer of 2013 Parks recorded another full-length, Phantoms of Place, in a mountain cabin in northern California. To date the project’s most cohesive and essential release, Phantoms is an exploration of physical space, place and tradition, and an interpretation of life and death in the arcane wild. Parks and Puryear were joined by Jonny Tunnell for Timber Rattle’s first two tours as a three-piece in Europe in the springs of 2014 and '15. Timber Rattle will return to Europe again this spring to support their first vinyl LP release, The Clearing (on Prague-based Lokal Rekorc), a synth-heavy collection of psyche-pastoral songs recorded in the woodlands of upstate New York.