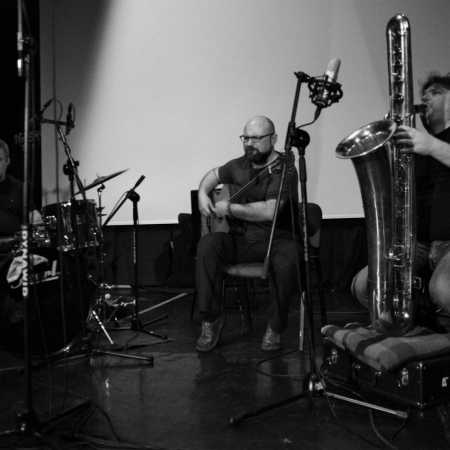 Energetic trio, whose members are the two Lithuanians and one Norwegian, plays music, whose author is the leader of the group. A group of teetering between the two musical styles, free improvisation and new academic music. Mockūnas holds the Danish Music Awards 2004, Vilnius Jazz Awards for the year 2006, the prices of the Union of Lithuanian musicians called the Golden disc for the year 2008 and also holds the golden cross for the best Lithuanian composer dramatic theatrical music for the year 2011. Mikalkėnas acts as a composer, pianist and accordion player, which tries to develop non-commercial art based on improvised music. Berre, originally from Norway, is one of the most exciting young drummers on Danish improvised music scene. Its a set of percussion instruments bells, a sheet metal plates and chains, even the covers of pots, table cloths, forks and chopsticks. In his playing he also electronics in real time. – Translated by Automatic service