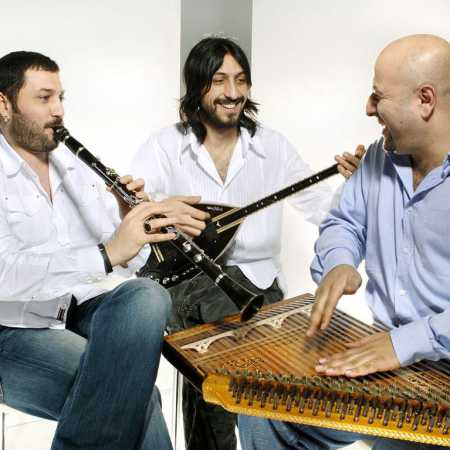 Turkish musical gem. Clarinetist Hüsnü Şenlendirici, the Qanun player Aytaç Doğan and lutenist İsmail Tunçbilek you can play around with the audience like a cat with a mouse. "The experience was a trip of thousands of miles away, before we ever got with Tara Fuki. Other galaxies. I recommend to all mankind, "she said of the concert phenomenal trio Andrea Konstankiewicz.

Held at WOMEX years ago and today is one of the milestones of the fair: perhaps the first time that any group received a standing ovation. But who then sat in the crowded hall, had no choice: Taksim Trio is able to run up to an incredible high mazec, which will literally pin them to the seat, forcing disbelief. Then in itself something changes, mood changes, and starts intricate, lyrical contemplative, emotionally immersive track, you have to change what you do to fly. However, the trio wrote that "creates sound, no doubt coming from heaven itself."

With unlimited virtuosity and improvisational musicians Raus switch between Turkish, Roma and traditional Arabic music, rewriting the rules of classical chamber music and the spirals are issued towards jazz or ambient. If there is the need to characterize the music in one word, then it is clear: Istanbul, ancient crossroads of East and West. However, the Turkish metropolis was blown away and Alex Hacke (Einstürzende Neubauten) as director Fatih Akin is a musical paradise Istanbul interviewed in the film Crossing the Bridge: The Sound of Istanbul.

Taksim is indeed the name for the kind of improvisation in Turkish classical music, but the trio thinks it famous square in the heart of Istanbul, where a recent history of anti-government demonstrations. Symbol of resistance but with Taksim Trio unrelated. "The name we have chosen deliberately because the square meet people from all over the world. And that is exactly what we want to express our music – each other culturally enriching, "explained the purpose of the title trio Aytaç Doğan. In Turkey are among the masterpieces Arab zither player in the Qanun. In translation “law”, perhaps on the grounds that the Middle Eastern music plays a key role Qanun and blends in with the other instruments, according to him.

Sedmistrunná lute Ismail Tuncbilek is called baglama and it depends on the composition, if left lute sound acoustically or her nearly rocker to engage in electricity. And if his game can hear influences of flamenco, do not be surprised, in Spain, it came to a lot of new tricks and work together quite picked up from touring guitarist Paco de Lucia.

Clarinetist Hüsnü Şenlendirici was born into a significant Romani musical clan and get blessed with not only the player’s virtuosity for which it is sought, but also a sense of fusion. In the group Laco Tayfa Turkish tradition mixed with funky and jazz, and when the U.S. emerged in Istanbul funky band Brooklyn Funk Essentials, shot by the Grammy nominated album In The Buzz Bag. About Hüsnüho Statute of the Turkish clarinet superstar known throughout the Balkans evidenced by the over one hundred and sixty thousand units sold custom board The Joy Of Clarinet. – Translated by Automatic service