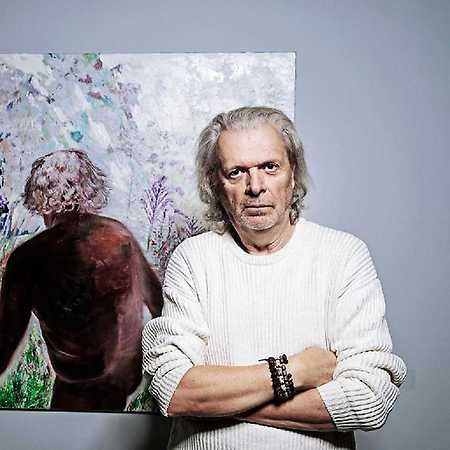 Jiří David is a leading figure in the formation of postmodernism in Czech culture during the latter half of the 1980s. As with his contemporaries, his early works leaned toward neo-expressionism, as evident in the unofficial Konfrontace (Confrontations) exhibitions (starting in 1984). His work then underwent a transformation similar to that of other young artists in his circles with a focus on postmodern treatment of the painting. His paintings at that time approached the Italian Transavantgarde and Jung Wilde.

As basic visual information he began to use signs sometimes accompanied by text. His canvas, based on work with colours and sometimes even monochromically harmonised, bore with them a clear, easily comprehensible message. Drawing, the object, installation and photography plays a significant role in his work. In his diverse works David brings together a performative approach to art and interest in the paradox, in which he skilfully oscillates between a romantically aestheticizing approach and a rational detachment.

A very important early work of David’s is his Home cycle of paintings which he fits with a national theme and an interest in low-brow genres, partly in reaction to the onset of postmodernism and partly to the development of Czechoslovak society at the end of the 1980s. Jiří David cofounded – to assert postmodernism as completely essential – the group Tvrdohlaví and since 1990 has been one of the main creators of Prague’s MXM Gallery.

At the turn of the 1990s he was one of few Czech artists to make a name for himself on the international scene. His works were mentioned in Flash Art magazine between 1987 and 1993, and the Italian Transavantgarde guru A. B. Oliva included him in his book Superart. In 1990 David exhibited at Aperto in Venice. He then took part several more times in accompanying exhibitions of the Venice Biennale.