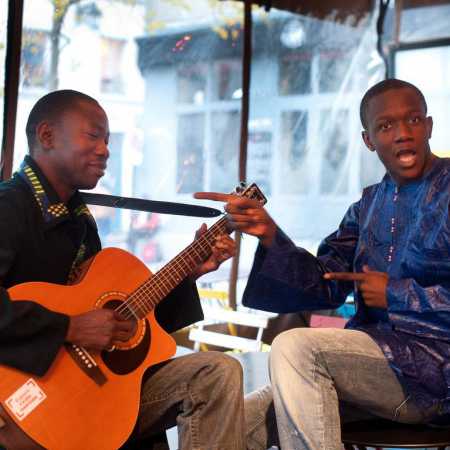 Debademba large Pan-African family from Belleville district of Paris. What song to jump from the Mandinka Afrobeat, mbalax, hunting songs from Wassoulou or dance styles from Ethiopia, all in vibrant introduced by poprockového funky sound.

It should not give the impression that the leaders of – guitarist Abdoulaye Traoré from Burkina Faso and famous Malian singer Mohamed Diaby – go west across easily comprehensible musical travelogue. Debademba means in Bambara large family and today both voluntary exiles perceive Africa: a source of pressures, compressed in European capitals into a powerful and increasingly dravějšího current nevnímaného as less valuable tolerance but as a symptom of changes of modern African music.

U mighty voice Diabyho you probably first starts young Salif Keita if they see him on stage but can not escape you well okoukané dance moves of Michael Jackson, the singer frequently present model, despite the fact that he comes from a family of weighted. “I do Mandinka with an American flavor,” said Diaby.

Extraordinary Traoré is a self-taught guitarist and ease Mandola also manages and transfers to flamenco and Cuban salsa, which is associated with a number of bands, which in the past thirty years he served. The feeling Traore pass headlong track to be triply changing color like a chameleon, binds spicy event: come out in the shade of the baobab tree, but in the Dutch prison, where he sat for a musical work illegally. They allowed him a guitar and inventing new Grifo and consisted of stocks.

The debut album Debademby hosted in 2011 the now famous singer Mali’s Fatoumata Diawara and the group does just kept short, if tested terrain. For it to last year’s novelty Souleymane is really spread her and hit her ambitions hiding. The five-member group Debademba invited Seven Samurai last year’s fair Womex and as the delegates do not tend to stay for the whole concert, because else just runs further, leaving few. And if not centuries, to be sure something caught quickly, because otherwise it really did not. So many energetic and original fusion has long been heard. – Translated by Automatic service