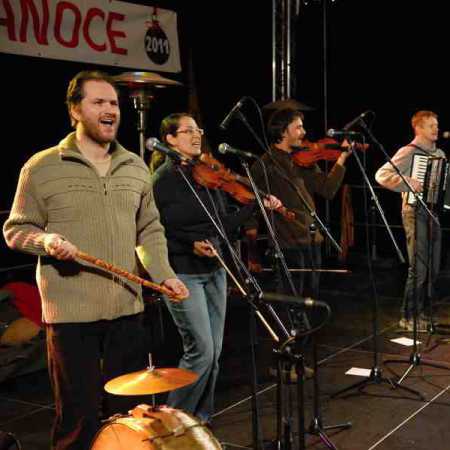 BezoBratři Group was founded in the fall of 2005 by three enthusiastic woodwind folk instruments, Císaríkem Paul, Mark and John Gondou Glembkem. The original goal of the trio was together to meet and share the joy of playing with each other, as the nature of these instruments alone will not offer, generally mean that an instrument of pastoral solitude. In this composition was also the name of BezoBratři – whistles, pipes and shepherd were made because of the elder. The first performance BezoBratrů was designed as introductions and demonstrations of various folk musical instruments, both solo and collectively. The turning point came when he longed for richer, živelnější music and in their midst recruiting players on other instruments. Finally, set a constant number of six members: Pavel Císarík – vocals, whistles, shepherd pipes, drums and percussion, Klára Cisariková - vocals, violin, Jan Glembek – whistles, shepherd pipes, cymbals, Marek Gonda – whistles, shepherd pipes , didgeridoo, Veronika Jiříčková - vocals, cello, Petr Šebela – vocals, accordion. In this composition recorded and released in the spring of 2007, the first album BezCeler. In the period 2008-2009 BezoBratři went through various internal changes, especially in the approach to folk song, which for them has always been a major source of inspiration for music. Gradually diversify away from pure classical folklore genre (more precisely folklore) as the song began to operate more copyrighted. This approach is even more crystallized with the advent of significant figures violinist Jana Běták, which started very strongly authored participate in the creation BezoBratrů. In March and December of 2009 the band recorded their second album Bezobav, based on spring 2010. In the spring (specifically in March) 2009, the band filmed a medallion for CT to Molly show. – Translated by Automatic service