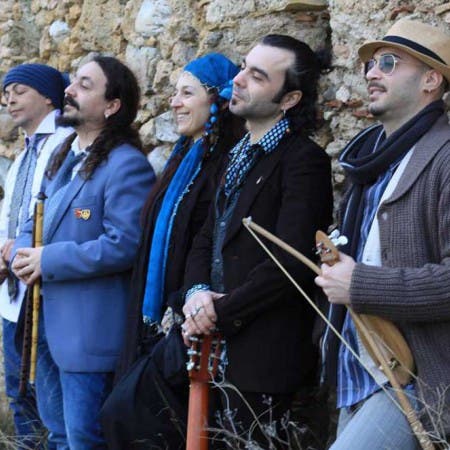 The band was formed in 2011, with the ambition of showing the beauty and wealth of the local musical tradition of Calabria. The turning point in the history of the group was in 2014. The meeting between Domenico “Mico” Corapi and Gabriele Trimboli resulted in the shift from traditional, local Calabrian repertoire to music open to a number of other experiences and inspirations, seeking ideas from Greece through Morocco to Spain. The artists transform and combine melodies, harmonies and rhythms from Mediterranean cultures; and they are also not indifferent to the music of Eastern Europe. Gabriele Trimboli grew up in a family of folk musicians, which is not uncommon in Calabria. He explored the local tradition from an anthropological perspective, carrying out fieldwork. During these trips he expanded his knowledge of the traditional repertoire of Calabria, but also learned vocal performance techniques and methods of playing on folk instruments. He learned directly from the old masters. Mico Corapi walked a similar path. The band’s music was born out of this deep fascination with tradition and at the same time is the individual, personal expression of its members.