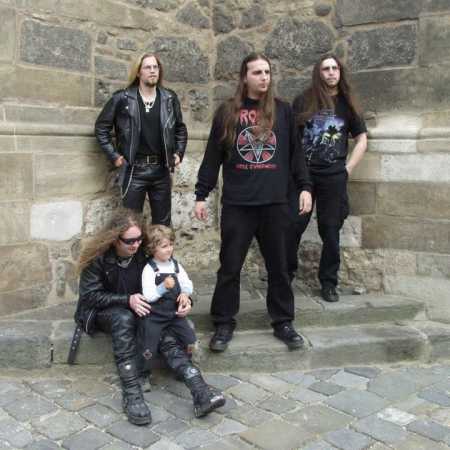 The history of the band of Asgard goes back to 1987, when it establishes the frontman and singer Mira Horejsek. The band almost 20 years for their activities through an incredible amount of changes both personálnich so musical. For these less than two decades has released three demo recordings-Road To the Devil (now rare, not to mention the iconic affair), Countess Bathory and Asgard, the curse of the King CD Stacha and last MiniCD Helpless heaven. From the original report remained only Mira-vocals. Other members have already almost 4 years functional report Olsson (ex-VUVR, ex-Happy Death)-drums, percussion, Parambucha (Solfernus, YBCA)-bass, Slavus (ex-Inner Fear)-guitar and Mike-guitar. It is currently hard at work on a great material for a second full-length album, which bears traces of the influence of progressively toned bands, so we hope that you all have what to look forward to! The band is already met on several occasions, inter alia, on the podium with such heavyweights as Root, Torr and eg. French Misanthrope and always met with very positive response. With the band Root for closer cooperation, as it is possible to hear for example. of the recordings of the curse of King Stacha.

The next decade opens in 2009, when the band odchazí Olsson and Slavus. The band, however, quickly recovers and picks up young “unspoiled” blood in the form of guitarist Pačesa and drummer Philip cream. And the plot of the play the devil…

For more vigor in the ranks of the Asgard is a young and talented guitarist Jack Zbavitel. Which is replaced by Luke Gazdu! Luke, all for asgard thanks!

At the turn of the year 2009/10, the band recorded a new album of Asgard Ominous times! The plate came out on the Panda Music and contains ten tracks. Lyrics added Jiří Valter Big Boss himself. In addition, the Board participated in Peter Blackie Hošek, Marek Pala, Lukáš Gazda. – Translated by Automatic service