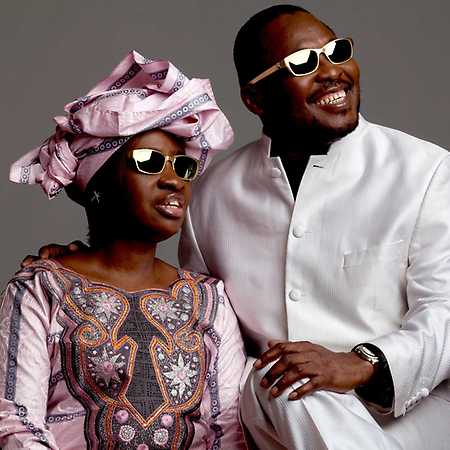 Amadou Mariam & is music duo from Mali. It consists of singer Mariam Doumbia (born 15 April 1958) and Amadou Bagayoko (born October 24, 1954). They are also known as “the blind couple from Mali”. For the first time they met at the Institute for the blind, where they found that both interested in music, and have the same taste in music.

Their first joint recordings originated in the eighties of the last century. It was only the vocals and simple guitar arrangements. Its distinctive sound to found later at the beginning of the 1990s. Today, they are easily recognized by their cry by the original mixture of the typical Malian sound with rock guitars, Syrian violins, Cuban trumpets, Egyptian ney, trombones and Indian tablou kolumbijskými. Music, in which all of these tools, it is sometimes referred to as afro-blues.

Between the years 1974-80 he played with the band still Amadou Les Ambassadeurs du Hotel. In 1980, Amadou and Mariam were married and began performing together. Amadou, then still continued his solo music career and led the music program at the Institute for the blind in Bamako.

In 1985, the couple made famous by playing ". the Malian blues. In this year he also made a successful tour of Burkina Faso. A year later, the couple moved to the Ivory Coast. Together they recorded several demo tapes, which led to the recording of their first album Sou Ni Tile in Paris, which became a hit in France. A few began to play at festivals all over the world.

In 2003 he teamed up with the world music star Manu Chaem, who produced their album à Dimache Bamako. – Translated by Automatic service