SF9 (Korean: 에스에프나인; shortened from Sensational Feeling 9) is a South Korean boy group formed by FNC Entertainment. SF9 is the company's first dance boy group to debut. SF9 debuted on October 5, 2016 with the release of their first single album, Feeling Sensation. The follow-up to the album will be released in March 2019. 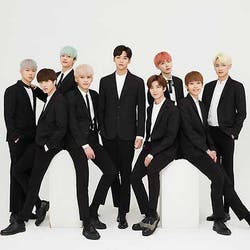