Deborah de Luca is an Italian techno music producer. When she met Giuseppe Cennamo – also an Italian DJ – she started to create her first songs under his supervision, as well as mature musically. In 2013 she founded Sola_mente Records, where she released such tracks as Guitar or Sleeping With You. A few years later she released the critically acclaimed debut album Ten. Deborah travels every week from continent to continent, playing in international clubs and at the biggest festivals. Her productions, which are a combination of hard techno and minimal sound, have become a recognizable brand over the years. 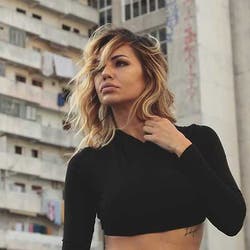